What Does Per Stirpes Mean In Florida?

What Does Per Stirpes Mean In Florida?

What Does Per Stirpes Mean In A Last Will In Florida?  Last wills and testaments include a number of unique terms which often confuse individuals who are not familiar with the probate process. One of the most common terms that confuses individuals is “per stirpes”, which literally is translated to English as “by the branch”. This term refers to how the testor’s assets will be distributed to beneficiaries if they were to predecease the testor.

As an example, let’s say a testor with two children has instructed in their Last Will and Testament that their assets be equally distributed amongst their children “or to their issue, per stirpes”, if they were not to survive the testor. This means that the assets will be divided equally between their children if they were to not survive them.

DYING WITHOUT A WILL IN FLORIDA

When someone dies without a valid will, their assets are declared intestate. It’s important to note that “intestate” does not mean that the property now belongs to the State. In fact, Florida has a specific process in determining who receives the decedent’s assets in the absence of a valid will. 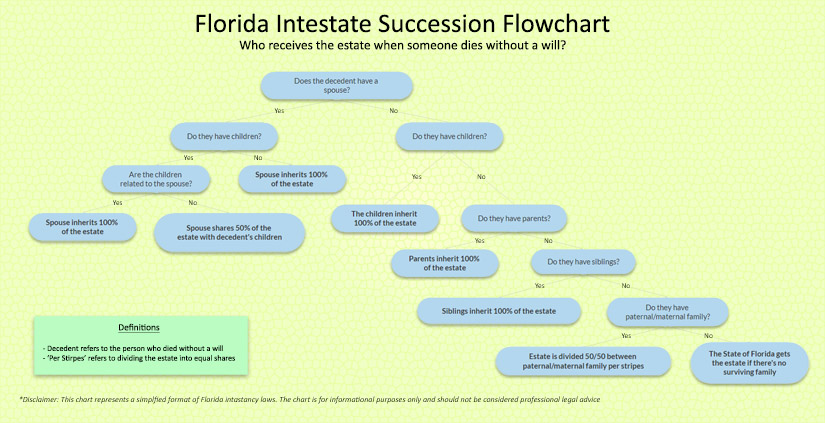 The full process can be found in Chapter 732 of The Florida Statutes. This process is very in-depth and often causes confusion/disagreements among beneficiaries. As a result, it’s vital to work with a Florida probate attorney that’s experienced with issues involving intestate succession.

DIFFERENCES WITH PER CAPITA

Another common term associated with Last Wills and Testaments is “per capita”, which can create further confusion when discussing the distribution of assets. While per stirpes will ensure that the shares originally willed to surviving beneficiaries will stay the same regardless of whether other beneficiaries pass on, per capita will instead divide the amount evenly among all living descendants.

This means that per the earlier example, if one of the beneficiaries passed away and had three children, the estate would actually be divided into four separate and even parts – one part for the original surviving beneficiary and the other three for each of the deceased beneficiary’s children. Essentially, in a will with per capita, you never create a share for an already deceased beneficiary as would occur in per stirpes.

WHAT THIS MEANS FOR YOU

The meaning of per stirpes may be different depending on whether you’re having the will prepared or if you’re the beneficiary of the estate. If you are creating a will for your estate then having per stripes included will ensure that your estate is passed down to your children or the next closest descendants in line.

In the event that you are on the other side of the will as a beneficiary or heir and notice per stirpes mentioned in it, it means that the share for any deceased close relatives will go to their descendants if any. Otherwise it will be split evenly between the closest surviving relatives as the will outlines.

Sometimes it can be challenging to understand the details of a will, particularly if there are many beneficiaries listed. In that case, most find it beneficial to work with an attorney specializing in probate and estate planning to help not only formulate the will but also to understand a will, especially when per stripes is involved.

Per Stirpes: Meaning and Uses in Estate Planning

What does per stirpes mean?

WHAT HAPPENS WHEN SOMEONE DIES WITHOUT A WILL?